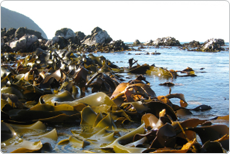 The Seanol®-brand Ecklonia cava Extracts such as Seanol®-P (a.k.a., SeaPolynol®) and Seanol®-F are rich in special class of health-supporting phlorotannins called "eckols". They are manufactured by Botamedi Inc (Jeju, S. Korea) and are the only Ecklonia cava extracts authorized by US FDA as new dietary ingredients.

The source of phlorotannins is a place where mystery and science come together, the ocean. For centuries the ocean held a secret known only to a few fortunate divers. There are places where exotic fish seem almost to cavort in the sea, playing and dancing with delight and energy not seen in other parts of the ocean. For decades, marine ecologists studied this intriguing but highly localized phenomenon. What was it about these places?

Scientists found that those seemingly magical places have a scientific explanation. These locations are literally underwater forests of certain types of brown algae characterized by thick golden leaves waving vigorously with the currents. Not surprisingly, the fish find there an ideal habitat providing shelter and nourishment.

But the truly unique discovery of these special places is that as the currents rhythmically sway the golden marine leaves, they release minute amount of certain molecules into the surrounding water. These unique, and completely natural molecules, protect the nearby life forms from harsh ultraviolet rays from the sun.

These molecules were isolated and identified by chemists in the early 1980's to be unique polyphenols later called "eckols". Since late 1980's up to present, hundreds of health-supporting scientific evidences of eckols have been discovered.

In 2005, a standardization and industrial-scale production of these special polyphenols from brown algae was realized for the first time by Livechem Inc (now, Botamedi Inc) and registered under the brand names "Seanol®" and "SeaPolynol®".